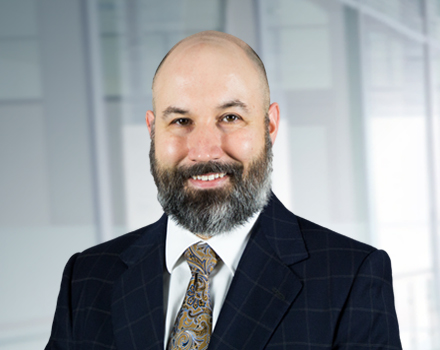 James A. Tate is a shareholder at Helmer, Martins, Tate & Garrett, where he represents individuals and businesses in complex litigation. His practice is particularly focused on representing whistleblowers under the False Claims Act. James works with whistleblower clients from all walks of life, including health care providers and administrators, pharmaceutical and defense industry employees, and others who work for government contractors or are aware of fraud against the Government. James has litigated False Claims Act cases for his entire career, in district and appellate courts across the country. He has successfully represented clients who uncovered health care, defense contract, and other fraud schemes perpetrated against the federal government and the states by some of the largest corporations. His work routinely puts him in high stakes litigation against the nation’s largest and most sophisticated law firms. James and his clients have recovered millions of dollars taken by fraud from the United States.

James is a graduate of the University of Cincinnati College of law. He served as the Editor-in-Chief of the University of Cincinnati Law Review for 2008–2009, and as an Articles Editor on the Human Rights Quarterly, 2007–2008. While in school, James also founded the U.C. Law student chapter of the ACLU, and worked as an extern for United States Senior District Judge Herman J. Weber of the Southern District of Ohio.