“We are pleased to announce our association with one of Ohio’s most experienced former judges and published authors” said James B. Helmer, Jr., President of Helmer, Martins, Rice and Popham Co.

Painter served as a judge for exactly 30 years (Ides March 1982–Ides March 2012). He was elected to the Ohio Court of Appeals in 1994, and served until 2009. Previously, he had served on the Hamilton County (Cincinnati) Municipal Court for 13 years. 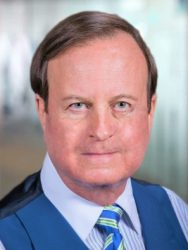 A Cincinnati native, Painter attended the University of Cincinnati, where he was elected Student Body President in 1969. He earned a BA in 1970 and a JD in 1973.

As a judge, Painter was recognized as an outstanding legal scholar. More than 400 of Judge Painter’s decisions were published nationally, making him one of the most-published judges ever.

For 20 years (18 editions), Painter was the author of Ohio Driving Under the Influence Law, the only textbook on DUI in Ohio. He is coauthor of another legal treatise, Ohio Appellate Practice. He has written four law review articles, 160 articles for other journals, and a biography of William Howard Taft. His guide for business writing, Write Well, was published in 2007.

Painter’s book on plain writing, The Legal Writer, is now in its fourth edition.

As an Adjunct Professor of Law at the U.C. College of Law for 20 years, Painter taught agency and partnership for 13 years and advanced legal writing for 7 years. He has lectured at more than 260 seminars nationwide. In 2008, he traveled to Malaysia as one of four international experts on plain-language legal writing. In 2010, he spoke at the Fifth International Conference on Administrative Justice in Montreal.

As a volunteer, Painter has served as a trustee of the Cincinnati Shakespeare Company, the Cincinnati Freestore/Foodbank, the Ohio Justice & Policy Center, the American Society of Legal Writers (Scribes), the Mary Jo Brueggeman Scholarship Fund, and the Citizens School Committee. He is a member of the American and Ohio State Bar Associations, the Plain Language International Network (Plain), Clarity, the National Space Society, the Ohio Historical Society, and the World Future Society.

For nearly 30 years, Helmer, Martins, Rice & Popham Co., L.P.A. has focused on litigating the toughest and most complex cases. Helmer Martins has represented whistleblowers in dozens of qui tam False Claims Act cases leading to the return of more than $1 Billion to the United States Treasury, with proportional amounts to our clients. The firm has prosecuted False Claims Act cases on behalf of whistleblowers longer than any law firm in America, including our successful representation of the qui tam relators in United States ex rel. Sanders et al. v. Allison Engine Company, Inc., et al., a case requiring over 19 years of litigation in which Helmer Martins won issues before United States Magistrate Judge, the Sixth Circuit Court of Appeals (twice), the United States Supreme Court. This case also was the subject of Congressional amendments to the False Claims Act, for which firm President James B. Helmer Jr. was called to testify before Congress.

Helmer Martins is also known for its work in other areas, including its service as lead counsel for the Estate of Roger Owensby, a federal civil rights case won on summary judgment and affirmed by the 6th Circuit Court of Appeals, which produced the largest police brutality settlement ever for a single death in the city of Cincinnati. See Mark Painter’s biography for more information.