Cincinnati law firm Helmer Martins announces publication of the 2018–2019 edition of Ohio Appellate Practice, which is part of Baldwin’s Ohio Handbook Series. This text is co-authored by Judge (Ret.) Mark P. Painter, who is of counsel at Helmer Martins, and Andrew S. Pollis, a Professor at Case Western Reserve University School of Law. 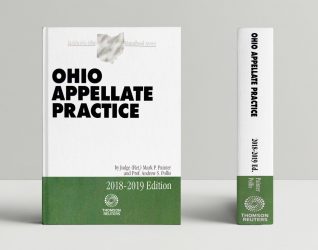 Contents of the text also include:

Ohio Appellate Practice is available for purchase from Thompson Reuters.

Judge Mark P. Painter served as a judge for 30 years, first for 13 years on the Hamilton County (Cincinnati) Municipal Court, followed by 14 years on the Ohio Court of Appeals, and then three years as one of seven judges (and the only American) on the United Nations Appeals Tribunal. He is also the author of publications such as: The Legal Writer: 40 Rules for the Art of Legal Writing, and Ohio Driving Under the Influence Law.